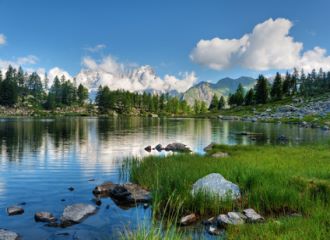 Aosta is a small city located in the Italian Alps, 110 kilometers from Turin. There are 35,061 inhabitants (12/2009) in approximately 21.37 square kilometers. Because it is very close to Italy’s border with France, visitors will not be surprised to hear both French and Italian being spoken in the city.

Because Aosta is located in the Alps, one of the things it is most known for is, of course, winter sports, including skiing, snowboarding, mountain trekking, and so on. Aosta is also known for some of the local fare it offers, including fresh fontina cheeses and carbonnade – a meal consisting of roasted ground beef in red wine.

Many who visit Aosta visit the amazing ancient Roman remains throughout the city. There is everything from remnants of amphitheaters to walls. There is a free map available and individuals can walk to all the sites. Other sites of interest include the Romanesque-Gothic Sant’Orso and Saint-Benin College erected by the Benedictines in 1000.

Aosta is serviced by the Aosta Airport (AOT), also known as the Corrado Gex Airport. This airport is located in the center of Aosta Valley and two kilometers from Aosta’s city center. The airlines found here are Air Vallee and Helops.